I intend to give blood as much as possible. I haven’t needed a transfusion myself, but I imagine what the loved ones of someone who does must feel. (Maris Luberg, donor)

Apheresis is a way to give more in a single donation. During the procedure, an essential blood component is extracted from the donor’s blood and the other constituents are transferred back to the donor.

Plasmapheresis is used to collect three treatment doses of plasma from a single donor. Without apheresis, three conventional donors would be needed to do this. As the patient generally needs more than one treatment dose, it is always preferable to use plasma from a single donor, as this will reduce the risk of reactions from the blood transfusion. Most  donors who tolerate conventional blood donation and who have suitable veins for the procedureare candidates for plasmapheresis.

Watch a video about how the procedure works:

Besides plasmapheresis, our Blood Centre also performs multicomponent apheresis procedures, where thrombocytes and plasma can be harvested at the same time; if necessary, erythrocytes (red blood cells) as well.

+ apheresis is safe and poses little inconvenience for the donor
+ possibility of donating high-quality plasma that can be used to make multiple drug doses
+ most apheresis donors say that after the procedure they have never had any physical complaints, they feel very good
+ while donating, donors can use a laptop over the Blood Centre’s WiFi connection, watch TV and read the latest magazines
+ when they give only plasma, other components in the donor’s blood are returned to the donor’s bloodstream and the blood is replenished in just two weeks
+ apheresis donors are healthy people who care about other people and their health
+ after having made a certain number of donations, plasmapheresis donors are eligible to receive free tickets for two to a performance or the cinema

Giving blood is a calling and a matter of honour.
You can just sit and rest for an hour in the middle of the day, while doing good for someone

How does the procedure work?

Plasma is removed from the apheresis donor’s blood by a special machine – a separator (see top image). The machine has an enclosed plastic system meant for one-time use, and it is hooked up to the donor using a needle. To keep the blood from clotting, an anticoagulant is added to the donor’s blood. The plasma separated by centrifuge is collected in a sterile bag, and the remaining blood components are returned to the donor.

In the course of plasmapheresis, 720 ml of plasma is collected and the process is repeated in several cycles to accomplish this. The procedure takes 40-50 minutes and poses no harm to the donor’s health. Here is a video that provides a brief introduction to apheresis. 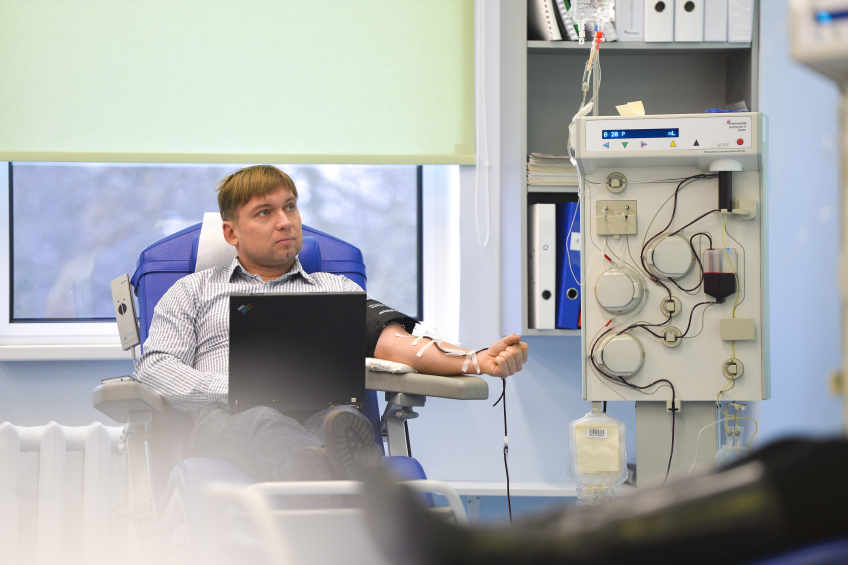 NB! All of these reactions pass quickly and do not cause lasting health problems.

How frequently can a donor undergo apheresis?

You have the chance to save someone’s life at least 12 times a year.

What happens to the donated plasma?

Plasma contains proteins and coagulants. The frozen plasma doses can be stored at a temperature of -25 C and lower and used within 3 years. The indication for plasma transfusions is for coagulation disorders and when large quantities of blood have been lost.

I am interested in becoming an apheresis donor. How should I proceed?

Contact the Blood Centre by telephone or e-mail, or visit us in person. Suitability is decided at a mini-physical, procedures are performed at the Blood Centre at Estonia blvd 1, Tallinn. Let us know that you are interested at:

Testimonials from apheresis donors:
It was a way to do even more good – a chance to give more.
The procedure is really also an opportunity to be completely calm and undisturbed for an hour.
If you get an invite, be sure to accept it. Apheresis donors are the donor elite – not everyone gets asked.