I like to reflect on the fact that I always come here in good spirits and pass that positivity forward to people who need it. (Indrek Sülla, seaman and apheresis donor)

More than 1,400 litres of blood given in the 10th anniversary of the summer donor tent programme 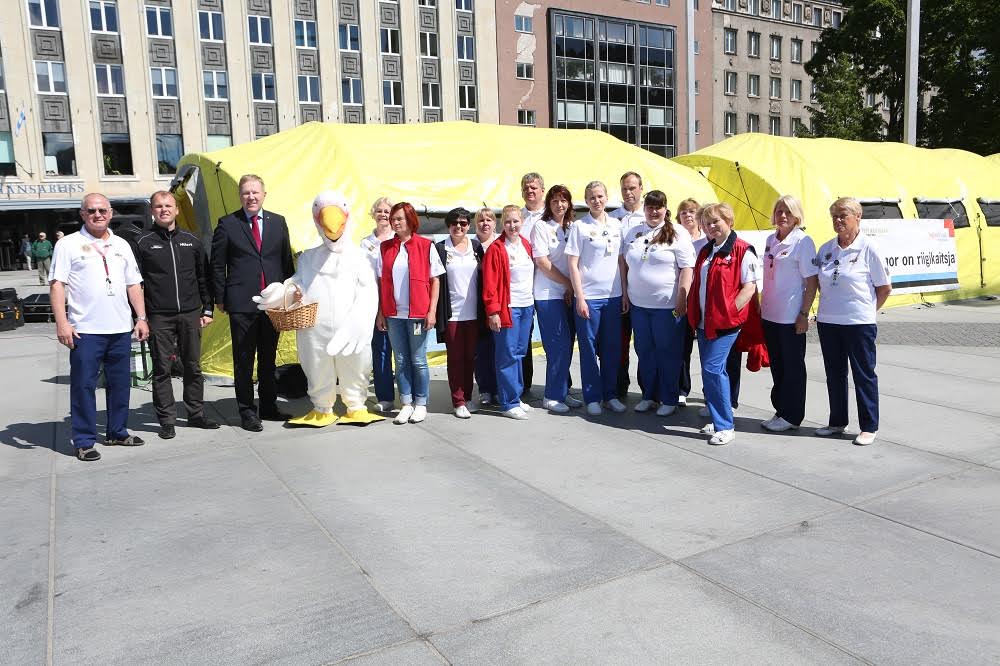 This summer, 3,182 donors made donations of a total of over 1,430 litres of blood in donor tents operated by the North Estonia Medical Centre’s blood bank and the blood services at Tartu University Hospital and Pärnu Hospital. The friendly donor community gained 564 new first-time donors.

“With the unsettled weather this summer, our donor tents experienced a mix of sun, wind and rain during their tour of the country. Yet this summer, which marks the tenth anniversary of the programme launch, ended up being the most successful of the last decade. Our cheerful-looking yellow tents were visited by a record number of well-meaning, friendly donors, and thanks largely to them, all patients who needed blood got help,” said Riin Kullaste, director of the NEMC Blood Centre. She added, “We’re especially pleased with the positive feedback from donors for the donor tents project, and the fact that the Tartu and Pärnu part of the donor tent drive proved especially successful. A seasonal high was set at the tent in Viljandi on 10 August – a total of 179 people visited and 159 became successful donors!”

Over the summer, the North Estonia Medical Centre blood bank donor tents made stops in Keila, Paide, Rapla, Haapsalu and, on two occasions each, in Rakvere and Tallinn. Over 21 days, 2,197 donors gave blood, of whom 336 were first-time donors; the total yield was 988 litres of blood.

Tartu University Hospital blood service donor tents were set up on Town Hall Square in Tartu and Viljandi’s main square. In the tents in these two cities, 516 people gave blood, of whom 122 were donating for the first time. A total of 232 litres of blood was collected.

Pärnu Hospital’s tents could be found in Pärnu, the country’s “summer capital”, in May and September. Over the four days, 469 people gave blood, of whom 106 were donating for the first time in their lives. A total of 211 litres of valuable blood was collected.

Everyone who donated was entered in a drawing held by tour operator Fantaasiareisid. On 15 September, the grand prize was drawn: a weeklong trip for two to Turkey to take place in October. The lucky winner is Tallinn resident Tiina Kõlamaa, who made her 32nd successful blood donation on 6 June in a tent set up on Freedom Square in Tallinn. Twenty-euro gift certificates from Fantaasiareisid went to Kerttu Mäger, Valeri Pening and Jane Ivanova of Tallinn; Epp Rattasepp of Tartu; Sergei Drõgin of Viljandi; Villi Bluum of Järva-Jaani; Terje Tanila and Rauno Saukas of Rakvere; and Reliina Kannel and Triin Kaljur of Türi.

Dr Riin Kullaste has the following message for everyone in good health and who cares about themselves and others: “In spite of the fact that the donor tent summer has now successfully wound down, we call on everyone, age and health permitting, to regularly give blood because unfortunately no one is safe from accidents and illness. And who knows? One day your loved one or you yourself might need a transfusion.”

To be eligible for giving blood, donors should be healthy, rested, have recently eaten, weigh at least 50 kg and be between the ages of 18 and 60, and either an Estonian citizen or have lived in Estonia over a year on the basis of a residence permit. The Blood Centre encourages donors to give blood regularly, three or four times a year. Each donation helps at least three patients. Donor blood is most often needed by cancer patients, women giving birth and newborns, and patients who have undergone serious operations, as well as people with anaemia, blood loss, severe injuries or various other illnesses or conditions where a transfusion may be needed. Around 19,000 patients a year receive blood transfusions at Estonian hospitals.

The donor tents toured the country for the 10th summer under the motto “Ka doonor on riigikaitsja”, which points out that donors also do their part to contribute to national defence. The tour lasted 29 days. The tour, which runs from May to September, stopped in nine cities and towns: Tallinn, Keila, Rapla, Paide, Haapsalu, Rakvere, Pärnu, Tartu and Viljandi.

See you at the country’s blood centres, at donor drive events and next year’s donor tents!