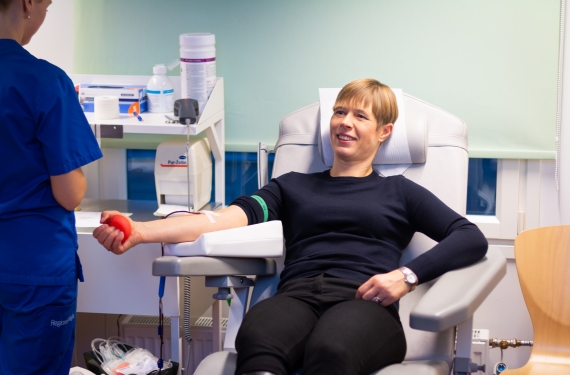 On the afternoon of Friday, 23 November, President Kersti Kaljulaid came to donate blood for the third time since her accession to the office. This time, she visited DoonoriFoorum.

The President said that she closely monitors when she is able donate blood again because of the frequent need to travel for work. The President’s last trip to Africa was more than a year ago and the next one is already lined up, which is why this was the best possible moment to donate. President Kaljulaid hopes that the 12-month blood donation deferral period for people who travel to malaria risk areas is shortened, so that next time, she can give blood in a donor tent on the Freedom Square in summer.
The President was accompanied by three donors from the President’s Office, one of whom gave blood for the first time. This turned their thoughts to forming a blood family, which the President considered something that has a future and should definitely be made official. All of the donors left feeling positive and received many thanks from the Blood Centre.